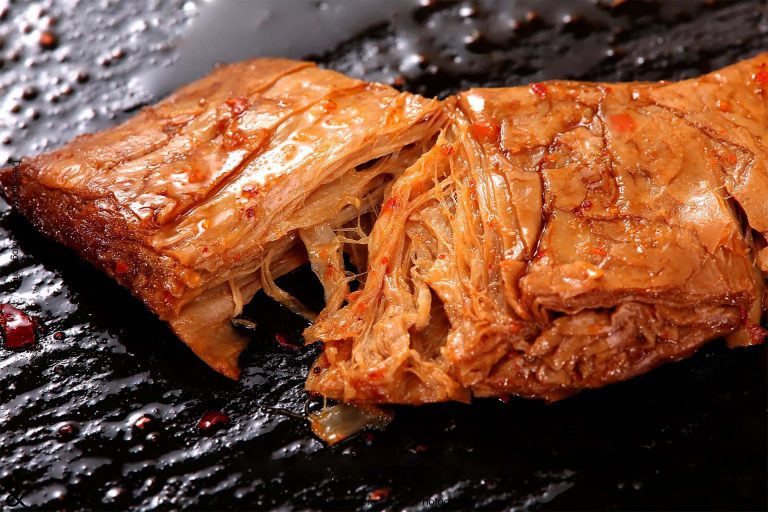 The invention belongs to the field of food processing, and relates to a method for producing instant vegetarian meat by using a screw extruder with soybean protein isolate as the main raw material.

There are many kinds of soy protein products in commercial form, which are mainly divided into soybean protein powder (protein content 50%~65%), soybean protein concentrate (protein content 65%~90%), soybean protein isolate (protein content greater than 90%). However, these soy protein products exist in powder state and need to be reprocessed or added as additives to other foods (such as meat products, flour products, etc.) before they can be eaten. An effective way of reprocessing is to restructure soybean protein through extrusion texturing technology, giving it a texture and taste similar to animal meat, which greatly increases its edible properties. Using soy protein as raw material, the non-puffed extrusion texturing process can be carried out in a high moisture state to produce vegetable protein ready-to-eat vegetarian meat products with very similar texture and structure to animal meat.

However, when using the high-moisture extrusion method to produce non-puffed ready-to-eat soy-based meat products, due to the high pressure in the barrel, the existence of excessive free water, and the open structure at both ends of the barrel, it is easy to produce a The front blast, or the reverse flow backward. This requires strict selection of the raw materials used, coupled with optimized operating parameters and screw structure, in order to finally achieve effective extrusion texturing under high moisture conditions.

Soy protein is known as the vegetable protein with the most excellent nutritional value. The addition of exogenous protein or starch components will undoubtedly reduce the nutritional value of the product and dilute or disturb the inherent characteristic flavor of soy products.

The object of the present invention is to provide a method for producing instant vegetarian meat with soybean protein isolate, which uses soybean protein isolate as the main raw material, only adds a small amount of soybean endogenous chemical component – soybean polysaccharide, and does not add any other external sources. The invention discloses a chemical composition, a method for producing ready-to-eat soybean vegetarian meat, and a product thereof.

The concrete steps of the method of the present invention are:

a. Soy protein isolate is mixed with soluble soybean polysaccharide, and the mass percentage of each component is as follows

b. Soy protein isolate is mixed with insoluble soybean polysaccharide, and the percentage of each component is as follows:

A twin-screw extruder with a cooling die is used for extrusion texturing. Different temperature settings are used in each area of ​​the extruder barrel. According to the sequence from the feeding end to the product outlet end, the optimal temperature of each area is obtained after optimization. set in order

The extrudate is cut into the desired shape using a cutting device, cooled and packaged to be the finished product.